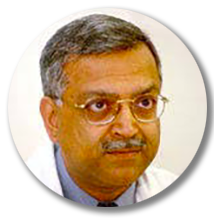 Dr Hamid was a Member of the Executive Council, Asian Pacific Association for the Study of the Liver (APASL), 2006-2010, and currently serves as President, Pakistan Society for the Study of Liver Diseases. He has been a long serving member of the WGO Guidelines and Publications committee and also a member of many guideline development groups of the APASL. He chaired the WHO Guidelines Development Group on hepatitis C treatment guidelines, which were released in April 2016.

Working with communities to increase capacity

10% of the global hepatitis C burden lies in Pakistan, with 7.1 million people living with the disease. According to a recent WHO report, 90% of cases are not diagnosed and less than 160,000 people were treated in 2016. National efforts towards eliminating the virus have been minimal with the bulk of efforts being carried out by NGOs on the ground.

Recognising the pivotal role healthcare practitioners’ play in raising awareness of the disease and scaling-up diagnosis and treatment, Dr Saeed Hamid, Ibne Sina Professor and Chairman of Department of Medicine at The Aga Khan University, Karachi, Pakistan, embarked on a series of activities to engage them in the fight against viral hepatitis.

Dr Hamid has used his role as a medical professional to interact with the community and healthcare workers. One of the key projects he is currently working on is The Echo Community Project titled “Extension of Hepatitis C Screening, Diagnosis and Treatment into the Community: A Low Cost, One Window, Test-and-Treat Model for Pakistan.”

The project goes into communities to educate general practitioners on viral hepatitis and screening. Over the course of 4 weeks, with the help of online modules and face-to-face workshops, general practitioners are educated in community screening using rapid tests in high prevalence peri-urban areas of Karachi.

This is supported by confirming diagnosis using GenExpert for hepatitis C and linking viremic patients to care.

Initially, general practitioners were hesitant about treating people living with hepatitis C having experienced low uptake and success rates with interferon treatments. Once educated on the advancements of the DAA treatment and the positive patient outcomes, they became confident and willing to treat patients through the programme. To date, more than 3811 people have been diagnosed and 54 treated.

One of the key components still lacking in Pakistan is a network of active patient-led advocacy and support groups. This is because there is still a large amount of stigma attached to the disease, with those affected being too afraid to speak out or even seek help.

To bridge this gap Dr Hamid created a forum within The Society of Gastroenterology (of which he is vice president) called Hepaid with the aim of bringing together and providing a platform for NGOs in Pakistan working within the field to share resources and knowledge, where previously they had been working independently with no communication between groups.

Thanks to his interventions, and that of other organisations running awareness campaigns and screening programmes on the ground, the landscape is beginning to shift. Those who have had a positive experience with the new treatments are now more willing to come out and speak about it and the impact it has had on their lives. As a result, awareness of the disease among the general population is beginning to rise.

We need to bring on board all healthcare practitioners, especially family physicians, nurses and midwives in rural areas to raise awareness, educate and reach marginalised populations. Dr Hamid is planning on working with a group of “lady health workers”. Initially focusing on obstetrics and gynaecology, they can be taught to widen their remit to include provision of the hepatitis B birth dose vaccine, raise awareness of viral hepatitis within their communities and survey local populations.

About the Medical Visionaries programme